Choose 6 photographs that represents what you aspire your photographic practice to be like.

I chose this image not really because of the aesthetics: I prefer more natural lighting as opposed to a fill flash. However, the visuals in terms of composition is compelling because the viewer is drawn into the environment and the subjects being pushed to the back of the frame make them part of the decor (coupled with their uncomfortable and blank expressions). This photograph is also quite difficult for a viewer to look at, feeling the discomfort from the subjects despite being in their homes.

The composition allows viewers to understand a lot of about the subjects so that individual stories can be told by each image without text accompaniments. All the viewer is told is that the subjects are either expectant parents or those who have seen their children ‘leave the nest’. 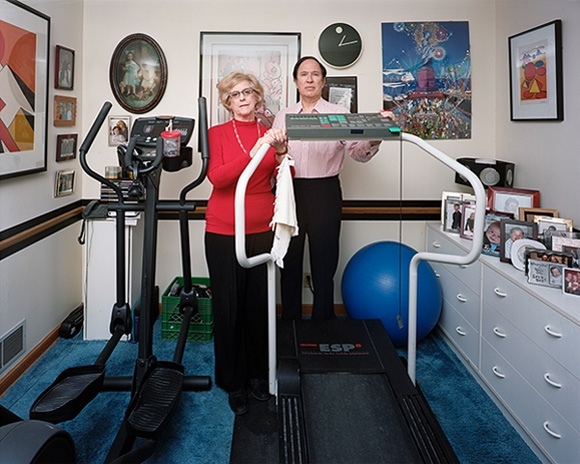 Charlotte Cory is an artist who uses archival photography to make comical collages and upholstery. What drew me to this series of work was initially the aesthetics (I have prints from London photographers of my own family and instantly recognised the style). After taking a second glance, it is clear that Cory has taken care in selecting animal heads to accompany the human form creating whimsical art.

What I admire is the mashup between old photography and modern abstract art, bringing a twist to viewing archived family photographs.

Van Meene did a series of work about adolescent girls and their physical changes as they grow. I chose this image as she uses interior photographs to accompany the portraits. This not only gives the viewer a rest from portraiture, but they also act as clever metaphors which add multiple layers of meaning. This image for example could portray blossoming of a new woman with the flowers the low sun creeping through the net curtains could be sunrise indicating a new beginning. Conversely the low sun could be sunset illustrating how innocence is dying, just as how the flowers will.

The aesthetics with the natural light is really what I aspire, but also the metaphors. Top dollar!

This image is one of the most shocking images of the Western World in modern photography (for me at least). I remember 9/11 quite well and I guess that it was my introduction to photojournalism. One image that shook the world that it was only ever published in the press for one day. This image is also reminiscent of Cartier-Bressan’s “The decisive moment” with a modern yet harrowing twist (even though this image was chosen from a sequence of this man’s fall). The ‘decisive moment’ is in fact two fold with this image as it also portrays the moment which the subject decided that the leap of faith was his choice to escape the devastation caused by terrorism. To make images as powerful as this one would be (with want for a more sensitive word) great.

What I like about Ross Rawlings is his commitment or even his obsession with story telling. He allows his viewers to witness all the personal moments in his life. He does it so well that a viewer really becomes a witness to his life, waiting for more.

Although I never used this image in any ‘final work’ is means a lot to me. The themes behind vulnerability, sleep, morning and natural light are all in this image. This also marks the start of Picbod (first task response) which turned out to be a real success (not only in my own work) but making decisions about where I want to take my professional career into the curatorial field.