I wrote a little while back about working with Liz Greebhan at UC Irvine to deliver a #phonar class and this was of course a challenge not only for her negotiating a new way of teaching her class, but for me to communicate how Jonathan and I have done it before using available technologies and techniques.

Meanwhile, Jonathan Worth has been developing Connecting Classes (#cclasses) which is an experiment and invitation for lecturers/teachers to adopt this method and to co-author a paper. Drawing from my experiences with Liz, I have been working with Jonathan to make a resource to support lecturers pilot their own connected class within a module.

If you’re interesting in connecting your class, check out Connecting Classes and get in touch with Jonathan.

But meanwhile, here are my findings from Liz’s class and check out my last post too.

Liz Greebhan, a university lecturer at UC Irvine, California reached out to Jonathan and I through Claudia Caro Sullivan, with the ambition to use Phonar Nation as part of her undergraduate module. Her class focuses on students being able to use digital media to make a positive contribution to teaching and learning. The driver behind this module is the stigma around how media can have a ‘negative’ impact on children’s development, promoting aggression through video games and passivity through television, for example.

Jonathan and I wanted to find out which networks they occupy and for what purpose as well as whether they use them as part of their studies and if so, how. At the beginning of the class, Liz sent the class a link to a Survey Monkey questionnaire developed by Jonathan and of the cohort of around 60 students, there were 55 responses.

On a day-to-day basis 50 of the respondents use Facebook, 39 use Snapchat, 32 use Instagram, 30 use YouTube, 17 use Pinterest, 14 use Google+, and other examples included Tumblr, WeChat and WhatsApp. Despite 46 of the 55 respondents suggesting that most of this activity is social, 50 of the respondents suggested that they use these networks as part of their studies, with the majority (78%) of respondents suggesting that they use networks to talk with their classmates when working on assignments. 19 of the 50 also suggested they use social networks as a means to research in their studies, and 3 pointedly suggested using YouTube as a means to find instructionals. These figures do not come as a huge surprise, as a recent graduate, my classmates and I used Facebook to communicate about the course content and deadlines. But what this does suggest is that the students haven’t before used social media directly as part of their classroom experience.

This was the first instance of the class learning in this way, the Twitter analytics indicates that there were 72 Twitter users: 47 (of 56 class members) have been identified, with other users including @kategreen28, @jonathan_worth, @phonar, @phonarnation, @ollywoodphoto, @chruiz, @sullivanclaudia, @doctorow, @mimchs and @elysiasheehan from outside the classroom. 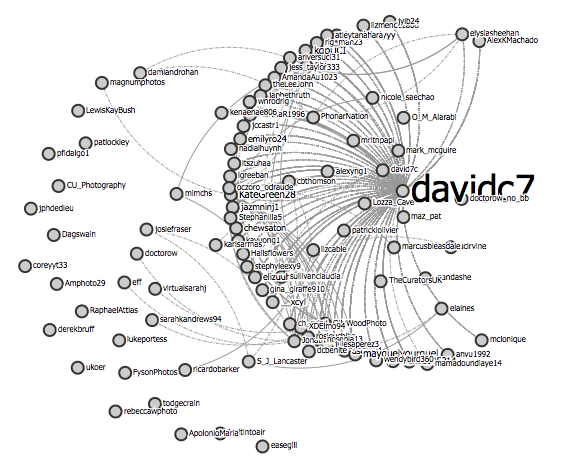 TAGSExplorer indicates that the 47 class members  tweeted 533 times with a mean average number of tweets being 12 per person. These tweets made up of 74% of the total tweets during the lecture. What this means is that when normally the class would be taking notes individually, 100% of the class notes would be made by the class; but what these results suggest is that there are other class members, notably in this instance @chruiz, @ollywoodphoto, @kategreen28, @jonathan_worth and @elysiasheehan. It also meant that 428,549 other Twitter users were reached through their tweets, that’s 428,549 people “overhearing” and potentially joining this class discussion .

Looking at the data visualisation through TAGSexplorer, the students’ tweets repeatedly contained and referred to @davidc7 (David Campbell, the recorded lecturer) thereby placing him at the centre of the network  as the person most mentioned. However, in terms of connecting the class with one another online, it was my name at the centre of the network, replying to tweets with my thoughts as someone with experiential knowledge of the subject, and asking questions of the students for deeper consideration and thought. The lecture’s content was not of Liz’s expertise; however, had this class been hers she could have taken on this role and become the centre of the network herself. 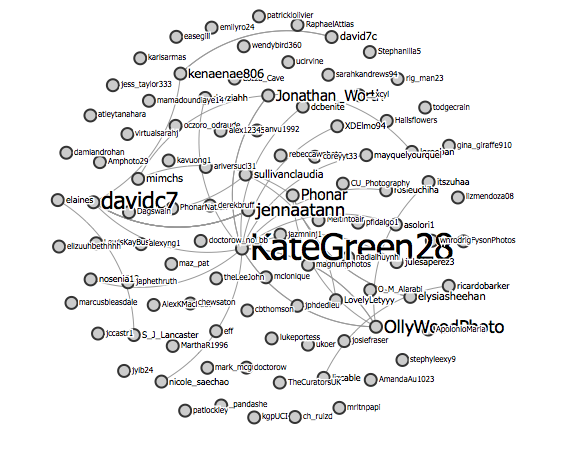 After the class, I was keen to find out what the students thought of the experience and so asked Liz to have a class discussion. As she has a large cohort, Liz decided to split the class into groups of six to have discussions whereby everyone could contribute their thoughts. She appointed a focus group leader and a note taker in each group.

On reflection of the class responses correlated with the data of Twitter engagement, I have drawn conclusions that similar levels of engagement happen in silos and that there is a mixed understanding of the digital affordances prior and during the experiment.

I took the seating chart and replicated the seating plan on a spreadsheet. Coupling the student with their Twitter ID, I could identify the number tweets and the tweeting behaviours of each student. Immediately what I noticed that frequent tweeters sat together so there are definite hot and cold spots in the room. What I then wanted to look at is what each table thought about the lecture and style.

One group (C2:R1) had a very clear engagement with the class, this is evidenced in their average tweets per person was 20, 8 above the class average. Their reflections of the class were indicative of having a high understanding of the content; their discussion focused more on the content and how the lessons learned apply to other disciplines.

However, there was another group with high engagement (C2:R2) that was more critical of the format of the lecture, suggesting that there was “no time for discussion” and that the fast pace meant that they forgot some of the detail. This thought was common throughout the groups (C1:R1)(C1:R3)(C3:R2) with the understanding that the tweeting is good for notes, but the act of tweeting doesn’t lend itself to reflection in that moment. This is something that we are aware of, the lecture is meant to be very focused; however, when the class time is only 1 hour 20 minutes, with an introduction, lecture setup and a 40 minute lecture, there was little time for a post-class reflection. Moving forwards, when class time is short, there should be a shorter lecture (this was suggested by (C1:R1)), time for reflection and an encouragement to do individual reflections on a blog.

Yet interestingly, there was a group (C1:R2) that had low engagement on Twitter with a below class average frequency of tweets, but commented on how they used Twitter to read other people’s notes, this comment was also made by (C1:R1). They also understood and benefitted from being able to stop the recording and “liked being able to go at my own pace”. Another group (C1:R1) admitted to needing to pause because there was so much information so quickly and (C4:R3) also realised the benefits from pausing. Yet, this understanding of being able to pause the lecture was not realised by the whole class (C3:R2). This understanding of how using the technologies can afford a more suitable pace needs to be clarified with the class prior to the session so that the feeling of feeling rushed is not so apparent.