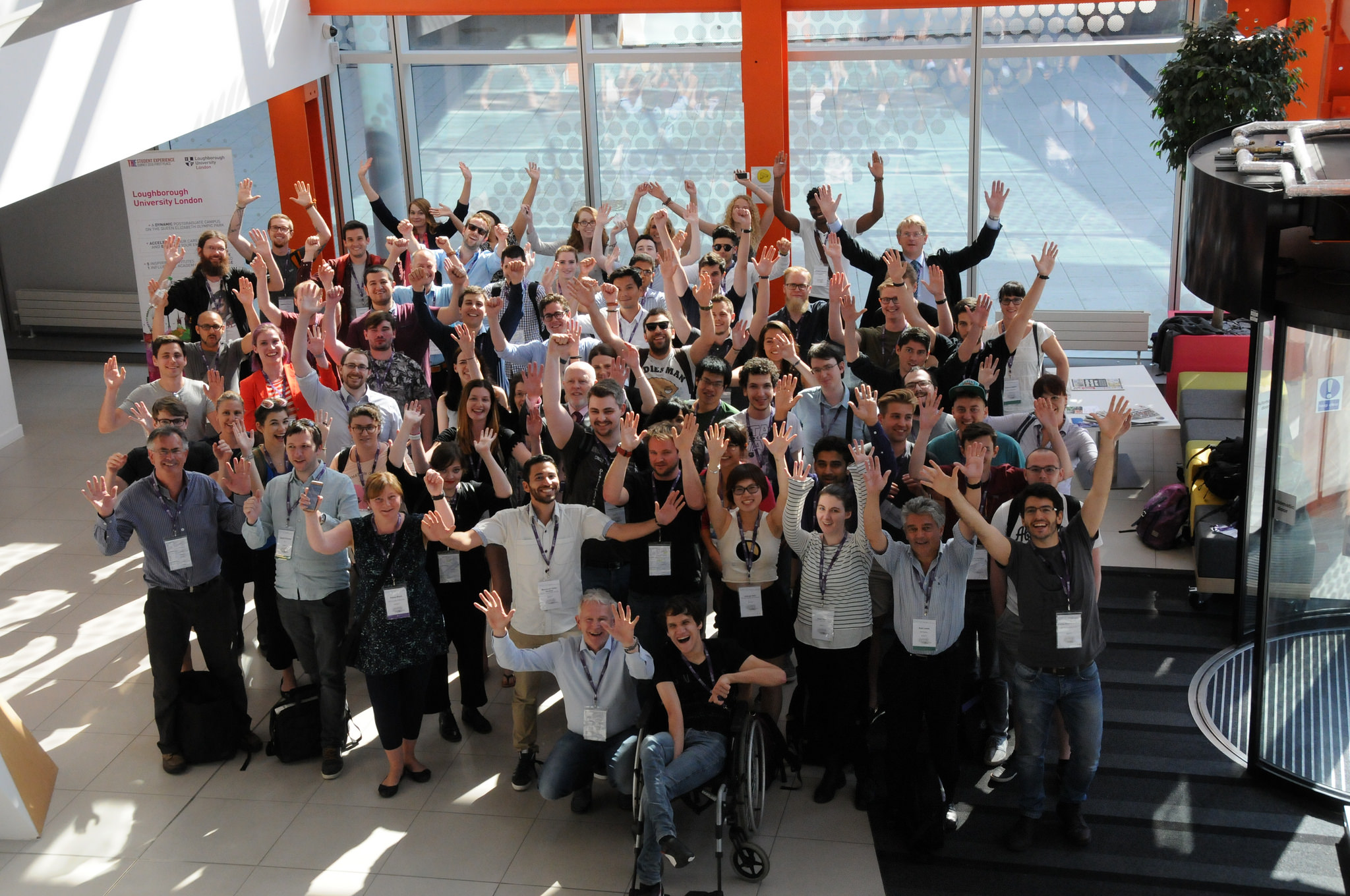 A couple of weeks ago I headed down to Loughborough University’s campus in London for the Digital Economy Network’s annual summer school. I was looking forward to spending a few days away with fellow PhD’ers and meeting new folks. This post will  provide an overview and reflection of the week. It’s pretty long and I think it’s more for my benefit of writing it all down – you can find a shorter version here.

Day one: travel, slide & catching up

Since I don’t live in Nottingham and I live near a good line to London, I decided it would be best for me to skip on the bus antics and meet the group at the Olympic village where the campus is based. While this was annoying because I quite enjoy the social aspect of being on a coach, it just made a lot more sense for me.

Amazingly, I arrived at a similar time to the group to get our room allocations. I wasn’t particularly looking forward to staying in Student Halls to be honest. Having a condition like Crohn’s, living in close proximity to people you might not be very close with nor have told much about your condition, makes me nervous. I checked out the halls beforehand which were almost identical to the ones I stayed in as an undergrad; luckily the rooms all had ensuite bathrooms.

Sometimes I find travelling with Crohn’s quite difficult and unfortunately this was a trip that wasn’t exactly easy for me. It was really warm and I didn’t drink enough from the get-go. So all rather self-inflicted.

But anyway, after a quick bag drop we headed to the Orbit (you know the big red sculpture in the Olympic park) to ride the longest slide in the world. I am a bit of an adrenaline junkie – I love a good rollercoaster – so I was super up for this. It did deliver, I have to say.

Feeling super hungry (none of us had eaten) we headed to nearby Westfield Shopping Centre to re-energise. I had some super yum jerk chicken and fresh juice. Juice bars are so hard to come by and most of the time they are so packed with fruit juices (or even from concentrate – bleurgh), so I was pleasantly surprised with having a yummy beetroot based pressed drink.

We had to register for the summer school at an evening reception which honestly I was running out of energy for, so I wasn’t particularly up for networking. I think many people felt the same with clusters of the different CDTs across the venue. I figured there would be plenty of opportunities to meet people so I didn’t feel too bad about it.

Our cohort had made plans to go out for some dinner at a Mexican Street Food restaurant which I knew would be difficult for me to find something I could comfortably eat, but hey ho I love a challenge. My good friend also has very strict, but different, dietary requirements so it was a challenge but I think we managed it in the end. Logisitics aside, I had a blast catching up with my pals and ranting about restaurant etiquette.

The panel was “Aligning skills to jobs for the digital future of the knowledge society”. I think this was much more focused around the private sector than in research instutitions since there was a lot of emphasis on ‘entrepreneurialism’ and ‘efficiency’. While these two qualities are great in any environment, I have concerns that sometimes the keen newbies may be subject to exploitation. We still have to maintain a health work-life balance afterall.

There were a couple of things from the discussion that stuck out for me:

I feel quite strongly about staying informed and problem solving. I was thinking about this when I was looking at a motviational quote on the wall in my gym that reads “don’t make excuses, make results.” It’s easy to identify a problem, but instead of wasting a lot of time moaning, get your wits about you and think creatively about how to solve it.

Strong advice from Harald Egner is to be open to learning as new technology emerges and impacts society. #SSEI17

I had a lot of time for what Harald had to say. He was very cognisant that his experience is not one that can be copied in ‘the knowledge society’. But something that was transferrable was this… That things change. Technologies and mindsets and we have to be open to it. We may not like it but we have to think about how we can make it work for ourselves.

Following the panel, we had a quick-fire networking workshop. This was super fast paced but enabled us to quickly iterate our PhD pitches into 1 minute. I met so many people who are doing completely different PhDs to me, many of them around improving efficiency in the manufacturing industry. Whether that was through lasers, sound or water pressure. Fascinating stuff! However, I think that my very social science-y PhD was a bit of a surprise to those who are developing and testing instruments. Telling people that I am taking a qualitative approach rasied some eyebrows for sure. 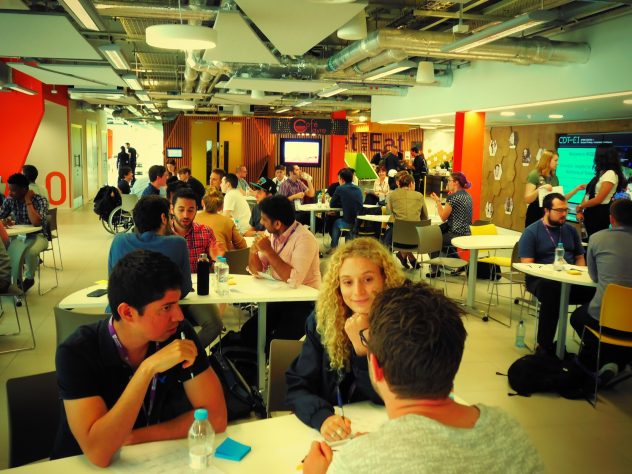 After a quick lunch (when a few of us decided that we wanted to hit one of the outdoor gyms in the Olympic park afterwards) we went our separate ways to breakout workshops. I opted for Cybersecurity since it is closely alligned with my interests. I have to say it was good fun. We had to pay a scenario-based game whereby we had to increase our power plant’s security over four rounds. There were options cards that represented different assets such as firewalls, cctv, network monitoring, threat assessment and so on. Each of the cards had different values and in each round we had a limited budget. At the end of each round we were told what our actions had meant.

While I am not an expert I felt that I knew enough to figure out where we should start. Someone else’s suggestion was to stick firewalls in straight away. However, I suggested that we need to understand our assets and threats before making a judgement of what needs to be protected first. After finding out our assets and threats we then moved on to various upgrades throughout the plant. Turns out we played the ‘almost perfect game’. We had one small data leak but the data was encrypted so the impact was very low. What I liked is that the game was centred around a Lego scene so we could point to the different aspects to help us articulate our points.

The day wrapped up, we did a workout in the sun and headed to the Podium for dinner. This ended up being an open bar and a light bite – while I was super hungry, it provided a bonding opportunity with some new people as we skipped down to Westfield in search of something more substantial to eat.

So I spent the whole day at a workshop on using Tableau. It’s data visualising software that many big companies use all over the world. Since I have no experience in making data look great (apart from making bar charts in Excel) I thought that this would be a great experience to get hands on and learn with others.

I sometimes find these kinds of tutorials really difficult because you end up copying what the instructor is doing but you don’t really know why you’re doing that function. We had a test data set so the data also didn’t really mean much to me. BUT, it got better. In the afternoon we were given challenges of visualising the data in certain ways and finding out answers to questions. Turns out I had picked up a lot more than I realised and ended up really enjoying it – I also downloaded the challenge slides and just skipped ahead because I can be a bit relentless like that. While my data is going to be mostly qualitative, I think there will be opportunities to visualise more quantitative data at some point so I’m quite excited! 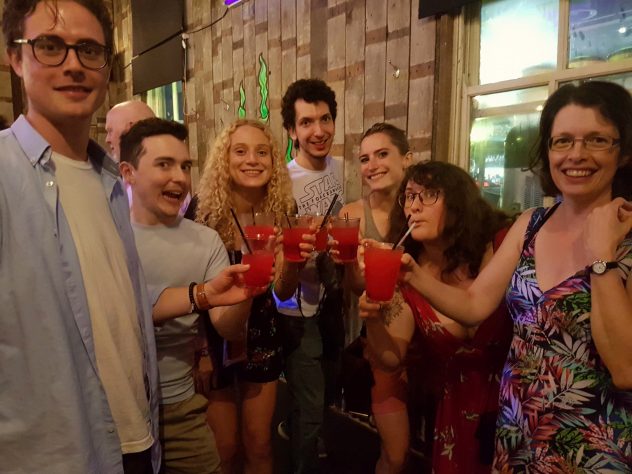 Onto the evening when we feasted at the Bat and Ball and played some ping pong. Most importantly, this is when we created Glushies. Since being much more careful with my Crohn’s I generally don’t drink but I decided that I was going to allow myself a couple on our final evening together. Joe and I saw that they had a slushie machine and insta 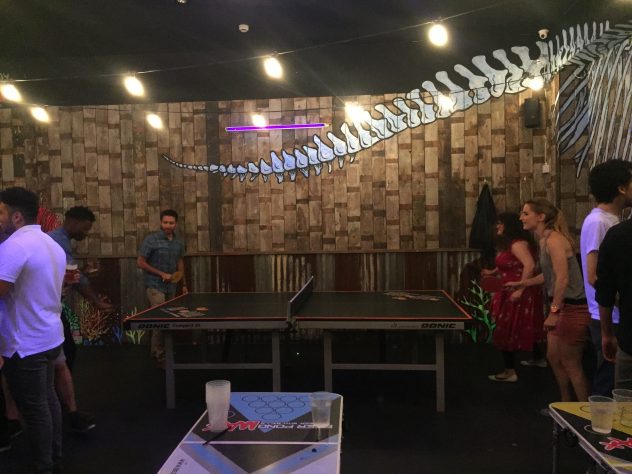 ntly thought that having one with gin in would make total sense. It did. Watermelon slushie+gin=delicious. We gave it a name and went on a marketing campaign to get other poeple to get one… I think we got over dozen before word got out that it was the official summer school drink. How entrepreneurial of us.  The drink obviously was full of sugar so immediately we got quite giggly. There are several stages of drinking Glushies, unfortunately I can’t remember them beyond the first stage: giggles.

The evening progressed into a huge game of around the world. I have to say it was a super fun end and we had a good laugh indeed.

On the final day I was at a posters workshop. I haven’t ever made a research poster so I thought it would be a good opportunity to learn about good practices. We were asked to draft up a poster to present in the afternoon. I decided to make mine around my PhD as a whole (since I don’t have any data yet). It was purple (for Crohn’s and Coitis UK) and had an infographic section that explains what Inflammatory Bowel Disease is. It also outlined my motivation, questions, methodology and outcomes.

Speaking about it in front of people was pretty terrifying to be honest. Everyone feels so sure about their research and I still feel like I am just finding my feet. Maybe at the next summer school I’ll feel more settled in. 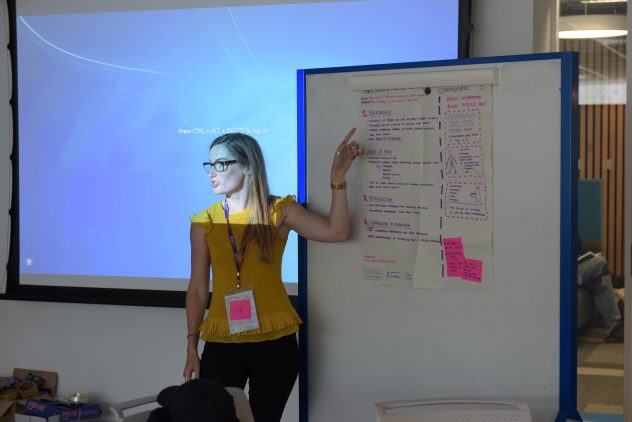 I had to skidaddle pretty quick to catch my train back (there was a lot of running involved which is something I really would rather not do!) so I missed the very end. However, I didn’t miss out on Mo’s hilarious one man show about how you can approach talking about your PhD.

Overall, I met some wonderful people and had some interesting conversations. I wish that my health was playing a little more fair, but I don’t like to let these things get in the way too much. I’d like to thank everyone who organised the summer school as well as those who delivered workshops. It was fab. 🙂