Last Wednesday I presented #PrivacyUG at #OER17 conference. I have told a lot of people about the class in one-to-one conversations but I hadn’t spoken publicly until this conference. The class was held almost a year ago and since then I have been riding a steep learning curve around surveillance technologies and how I think about them. I realise that this post seems to switch tense a lot, but I find the concept of writing about something that I said, but still believe, pretty weird so I’m not going to apologise…. 😉

I started my presentation by talking about being a learner and how I am still a learner. I talked about reaping the benefits of being an open, public and connected leaner. I also talked about the paradox of having an audience and how it might not always be a positive thing. It isn’t a secret that I have a lifelong chronic health condition, but I have made conscious choices around what I explicitly and (to my knowledge) implicitly share online. The impact of my digital footprint is not yet known to me, but I don’t want to be subjected to a whole bunch of algorithms. This is my motivation. I did a lot of reading around technology and as I got very paranoid, I found it difficult to communicate how important it is to position ourselves in a position of knowledge when it comes to surveillance and algorithms.

Another motivation is how I feel let down by my lack of preparedness to be learning, working and I guess just living with the digital. However, I don’t blame my teachers because it’s difficult to understand and everything was (and still is) changing so rapidly. I was taught how to use Microsoft products and tiny bit of HTML. Mobile phones were banned at school. We were told to avoid Wikipedia (but with no real explanation as to why). Cyber safety went as far as “don’t speak to strangers online”. Most of my learning with the digital happened at home on a wired-in desktop computer. I broke it a lot.

So, I’m an open learner and I owe a lot to open education. However the technologies that we use as a means to ‘be open’ are tracking us all the time. Students walk into the classroom with devices that are leaking data. All of this is invisible.

My answer was to create a secret-open class. What follows are crude instructions that I sent to invited participants. I wouldn’t even disclose the location explcitly. 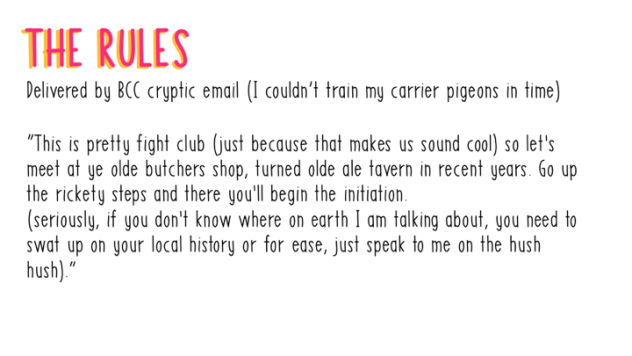 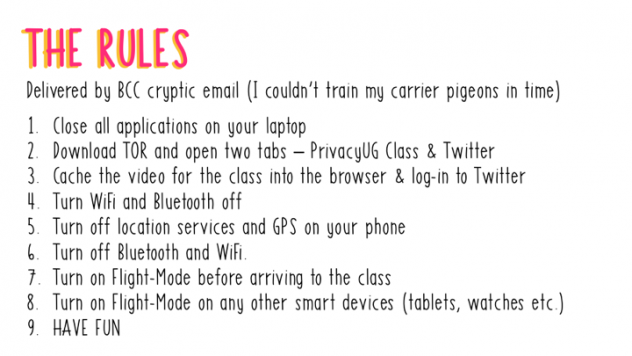 Once at the class, WiFi was then enabled and the participants joined a VPN-enabled hotspot I had created. There were no other WiFi spots in the area for any devices to have a ‘handshake’ with.

The point was to raise the notion of “Networked Publics”. Creating a secret class is a communal effort; one small slip up would out us all. I had to trust my comrades. Unfortunately, and fortunately, we were outed. And while it meant that our location was revealed to the algorithms, it was a great opportunity to explain the mistake.

A final point that I made was that I didn’t want the class to be a in a silo, as a fun class that happened one time. I searched the web for some data visualisers and tools for the participants to understand more about their own digital footprint that they have been crafting for years. The point wasn’t to make them as paranoid as me, but to give them the opportunity to understand the digital economy and technology a little more. With this knowledge, they can decide much more informedly how they would like to move forward into the future.

During the Q&As I had some fellow educators asking how they could facilitate their own secret class. I have pledged to create a tool-kit of how I done it, trying to include as many resources that helped me design it. I would really like to do another class with sister sites running at the same time. I think this could be a really powerful moment for distributing secret classes. Please reach out if you’re interested. 🙂

Storify Notes from the Talk: