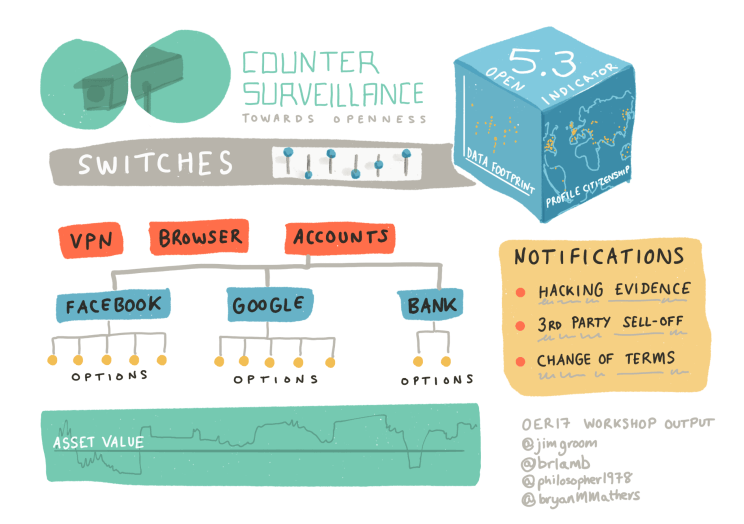 If Christian thought that his reflections of Towards Openness following OER17 were “late” then I don’t know how late this is at all.

Anyway, let’s just say that it has been a few weeks since Christian Friedrich, Markus Deimann and I facilitated a workshop at OER17 entitled Towards Openness: Safety in Open Online Learning. Towards Openness is a project that is unfunded and we work on in our spare time and you know what? I quite like that. What I like about it is that we don’t have to answer to anyone. We don’t have a set goal or any targets. It’s a project that is fuelled by our motivation. I think that there is something very powerful in that. Of course, it means that it isn’t something we work on all the time, but it’s always there waiting for us.

I personally think that OER17 has helped focused our attention on the project. We designed and Christian facilitated a similar workshop at OEB16 to a let’s say ‘less open-ed crowd’, we had a VConnecting session afterwards so that we could have an online conversation. I didn’t have the budget to go to such a pricey conference. But because I wasn’t there, and this isn’t to discredit the wonderful opportunity VConnecting gave me, but I didn’t get the ‘buzz’ from sitting at home. Actually, it was a similar feeling to when Jonathan Worth and I remotely observed (and participated in) a Phonar class delivered by Liz Greeban at UC Irvine – it felt strange not to be there in the moment. So being able to attend OER17 in London brought me a huge amount of satisfaction and a sense of purpose.

The workshop was only a short hour in duration so we were keen to get ‘doing’ quickly. Christian introduced the Towards Openness project before showing four provocations by Chris Gilliard, Sarah-Jane Crowson, Ahmed Kharrufa and Rob Farrow. In groups (there were three) the participants engaged in a discussion around the provocations, drawing on their own experiences before designing some kind of ‘intervention’ that would tackle issues around safety in open and online learning. We weren’t expecting any of these interventions to be fine-tuned or to even be implementable, but it is a good exercise to help narrow in on a problem. The themes that emerged from the provocations were that of externalities, be that the current political climate limiting travel (Ahmed); surveillance capitalism and Zuboff’s laws whereby “every digital application that can be used for surveillance and control will be used for surveillance and control,” (Chris); diversity of students from age to digital capabilities in a FHE (Further Higher Education college) (Sarah-Jane); and, ethics of care in open education (Rob).

Particular provocations that seemed to resonate were those of Ahmed and Chris. Two of the groups focused on notions of surveillance and privacy. One group (Chris Follows, Claudia Lehmann, Richard Heinen and Tobias Steiner) pitched an obfuscation intervention, known in Computer Science as ‘differential privacy’. This is when more data is collected from groups, but it becomes more difficult to identify a single person:

“With differential privacy, Apple can collect and store its users’ data in a format that lets it glean useful notions about what people do, say, like and want. But it can’t extract anything about a single, specific one of those people that might represent a privacy violation.” (Greenberg, 2016)

The other group (Jim Groom, Bryan Mathers, Rob Farrow and Brian Lamb), of whom most of them I think I bullied into joining the session over the lunch break pitched a plug-in that affords users to take control of their data: using levers to grant permissions of what data can be used by other companies and so on. This isn’t too dissimilar from a project currently running at Horizon called “Databox“. They also talk about a digital health score, which I think is interesting, but of course who gets to decide what is good and not, right? Privacy looks very different between different people. 🙂

Finally, the third group’s pitch spoke to Ahmed’s provocation. This group was made up of VConnecting champions (including Autumm Caines, Maha Bali for a short while, Jefferey Keefer and Suzan Koseoglu) and they were thinking about going beyond the corridor-style chats and having an on-site buddy to help take you (if you cannot attend) around. Or at least that was my interpretation…

So, for just a short hour there was such a good positive atmosphere and some really compelling discussions going on. At the same time, Bryan Mathers was thinkering away: 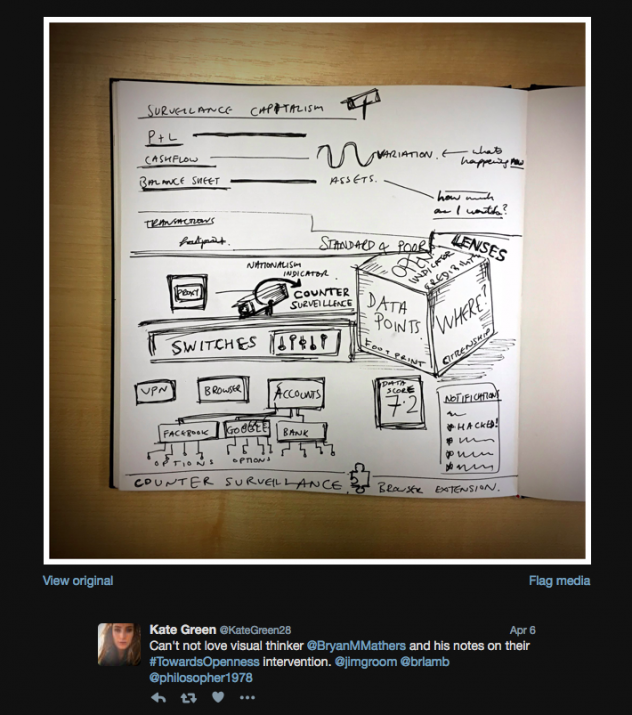 Since the workshop we held a Missed Conversation with VConnecting. This provided a space for people who didn’t make it to the workshop to participate in a synchronous conversation around the themes. We were also delighted to have Chris and Ahmed presence.

I was absolutely blown away with the positive feedback we have had both verbal and written and it has certainly helped motivate us to do more. Jim Groom and Frances Bell have both written blogs about the workshop and VConnecting exercise; Brian Lamb commended the workshop at an unsymposium held at DMLL in Coventry; and, Bryan Mathersdigitsed his thinkeries.

But where do we go from here? Privacy/surveillance and safety is just one arm of the project. Should we have more discussions? Do we have an open call for more provocations? We are open to suggestions to help steer this vessel towards openness.

Greenberg, A. (13 June 2016). Apple’s ‘Differential Privacy’ Is About Collecting Your Data—But Not ​Your Data. Wired. Available online: https://www.wired.com/2016/06/apples-differential-privacy-collecting-data/

1 thought on “Towards Openness at OER17”