In October 2013, before meeting both Carole and Jinx I had the opportunity to sit in a Skype conversation between David Campbell and Carole Nagger, discussing George Rodger. 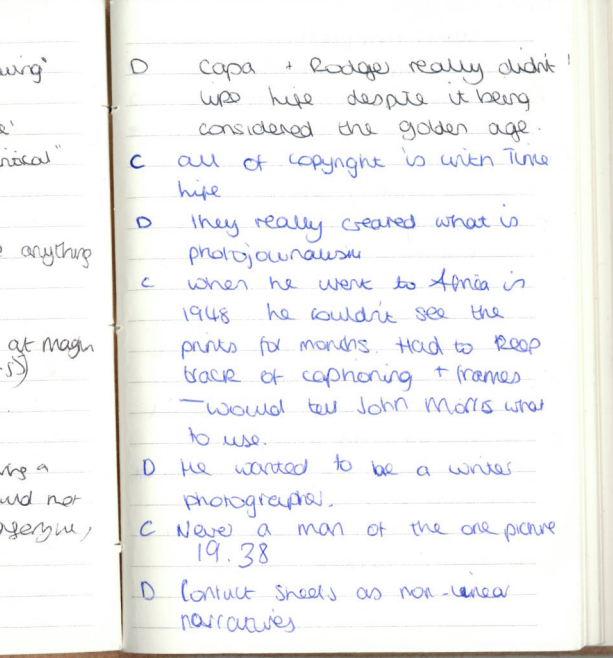 “to me it’s a cross between fiction and non fiction, when working with material you have to imagine” Carole talks about writing a biography based on her research taken from the archive which is solidified: she wanted to fill in the gaps to help the narrative, so to speak, flow.

C.N “kept a diary every day of his life”

D.C “how did you treat the diary?”

C.N “the diary was a narrative but also a mask”

I found this particularly interesting. We would identify that a diary is subject to emotional truth; yet, George has been said to repress his feelings in his writing. Although he is an eyewitness, it does make us wonder whether we can trust what he says to be his personal account. Treating the diaries in my own work will be a challenge: if George couldn’t come to terms with tragedies such as Belson and the death of Cicely, then is it right that I disclose  the diaries in their entirety? I don’t think so. I would like to keep this idea of concealment and personal privacy poignant in my work to echo the concealment of the archive itself.

Carole said that she first met George in the 1970s and talks about the archive “not at Magnum, but at his place”

George met Capa in Italy where “they dreamt of having a co-operative where they would not be dependent on Life Magazine, because they hated Life”. David then replies in the conversation adding that it is intersting they didn’t like Life when it is actually considered the “golden age” of photography. But nevertheless they didn’t keep their own Copyright until they established Magnum Photos in 1947.

Naggar explains that when George went to Africa in 1948 he wouldn’t see his film developed months after so he had a system that he noted down captions for each frame so that he could create a visual narrative without seeing the pictures. He would tell John Morris which pictures to use from his notes. Naggar also talks about the economy of the contact sheets as he was “never a man of one picture” and every frame on the contact sheet counted, few wasted. Campbell argues that looking at a contact sheet is really like a non-linear narrative, picking different frames out for different purposes and effect. George didn’t like to work in colour and favoured black and white because it “left space for the viewer to project themselves in” to the photograph.

The fact that I sat in on this conversation before first visited the archive and met Jinx meant that I was not aware of how the archive looked or anything. Would I get access to these diaries? Could I use these for my research and work? However now that I have been to the archive and done my own first hand research, I understand so much more about George and how I might want to portray him and his archive. With his preference to black and white, I want to shoot in colour: this means that the viewer can see its contemporary work as well as being able to see the colours and textures of the archive: furthermore, it is another division between his and my work.