At the Horizon CDT retreat last week I delivered a presentation about my research interests to some of my comrades as well as various academics who were either my supervisors, the CDT directors or, other people’s supervisors. Like with most of my presentations I just get stuck in with building some kind of narrative. In this case I decided to scaffold my motivation for this research.

I began with outlining Invisible Chronic Illnesses, that there are millions of people worldwide who have them and that the term ‘invisible’ is paradoxical. Some symptoms are not invisible, but they just may not be visible to the others. Some people also choose to keep their illness invisible by not telling others about it.

“Invisible illnesses may be defined as illnesses that are not readily seen (noticeable), but do exist. This is a paradox: they are not physically apparent but they physically exist” (Fainzang & Haxaire, 2011) 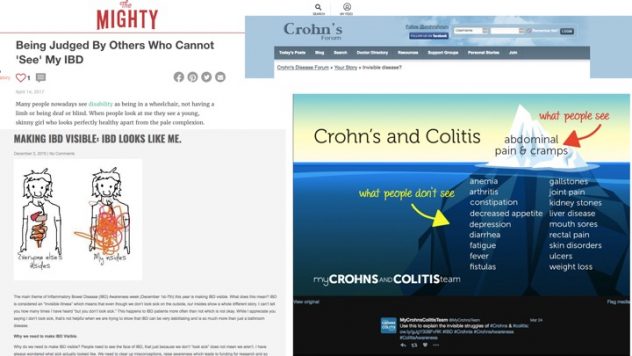 Inflammatory Bowel Disease is multifaceted in its symptoms, its cause, its triggers and its treatment. There is still not a definitive cause. Flare ups can be triggered from other ill-health, stress, food, and life-events such as pregnancy. Treatments can range from different medications, to strict diets as well as invasive surgery. As a result of all these varying factors and outcomes, it means that everyone with IBD has a unique story.

As a result of IBD being an invisible illness, it is extremely difficult for non-sufferers to empathise with chronic symptoms such as diarrhoea, fatigue, pain and nausea. Patients “suffer, often deeply, from the negative reactions of others,” as their symptoms “have no external evidence of suffering that elicit compassion” (Donoghue, et al., 2012). Research has also shown that those with IBD are more likely to suffer with mental health issues. As someone with IBD, I understand what it feels like to be lonely as a result of the disease. 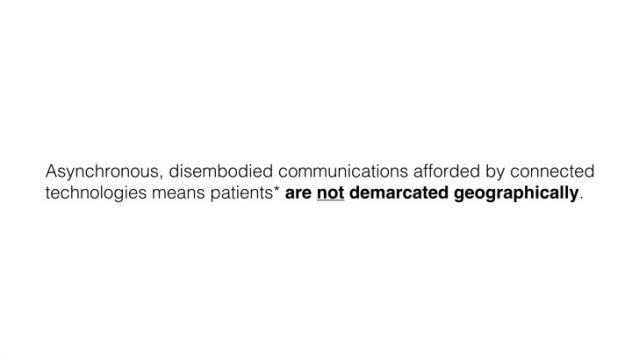 I then introduced the significance of connected technologies in a community that is distributed in its nature. There are around 300,000 people with the UK who have IBD, making it an uncommon illness; it took me over 10 years to meet someone face-to-face with the condition. The therapeutic affordances from IBD patients connecting online include (Coulson, 2013):

These kinds of positive interactions are much, much more uncommon offline, relying on local participation and synchronicity. Should someone live in a rural area, local support groups are extremely difficult to come by. 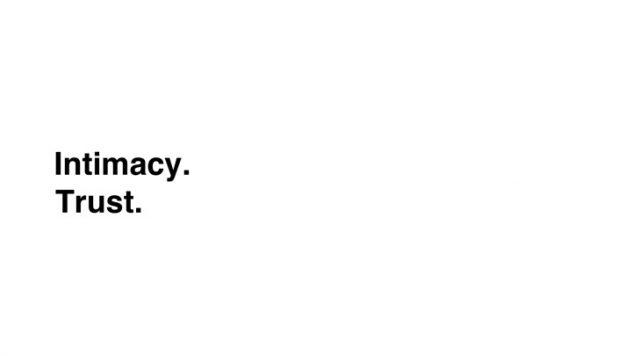 People’s experiences with IBD can be very embarrassing and difficult to deal with. When sharing them online, individuals demonstrate a great deal of trust with the community members that they feel that they can share personal stories with. For the most part people in these communities haven’t met in real life. Furthermore, people have to determine what information that is shared online can be trusted. And above that, there has to be some kind of trust in the platform provider, to keep that information secure and not to use the information out of context.

Previous research has demonstrated that users place a lot of trust into platforms such as Facebook, when the majority of participants agreed that “I trust that Facebook will not use my personal information for any other purpose,” (2007). I highlighted that this study is prehistoric in the post-digital age when technologies and attitudes change so rapidly. Another study that focused on a health support community shown that “mistrust [in websites] was found to relate to poor design appeal. The participants were less likely to trust sites that contained adverts, pop up surveys or that were poorly laid out. Poor design gave a negative first impression and the name of the website could lead participants to mistrust the site and its authors intentions,” (Sillence, et al., 2004). Again old research, and I expressed the need for me to do a much more substantial literature review, but the point that stuck out was that around advertising. Especially given that social media sites are riddled with them now. 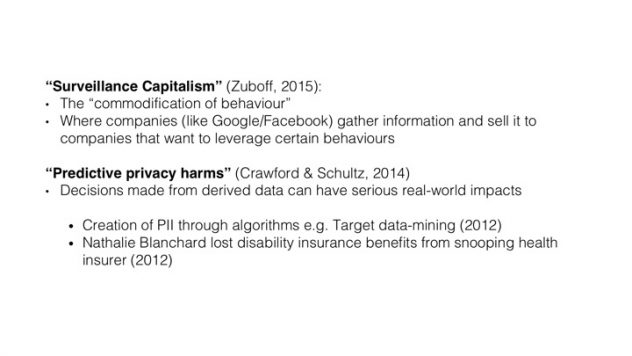 So I came to this point that there is clearly a lot of value in connecting online whether that is through popular social media networks or through forums. There appears to be a lot of trust as well. However, little is known of how notions of “surveillance capitalism” (Zuboff, 2015) and “predictive privacy harms” (Crawford & Schultz, 2014) are understood amongst the community members. There is a growing concern in the research field around the real world impacts of decisions using derived data (Crawford & Schultz, 2014). Of course these terms are not commonly known or understood, but I am interested in understanding what risks the IBD community considers when participating in and sharing information with the networked community online.

But I am even more interested in creating something to help educate and support people to come to an informed decision based on their own personal values and perceived risks. As I said in my talk “my jam” is creating experiences that are meaningful and appropriate – obviously I am referring to #PrivacyUG. 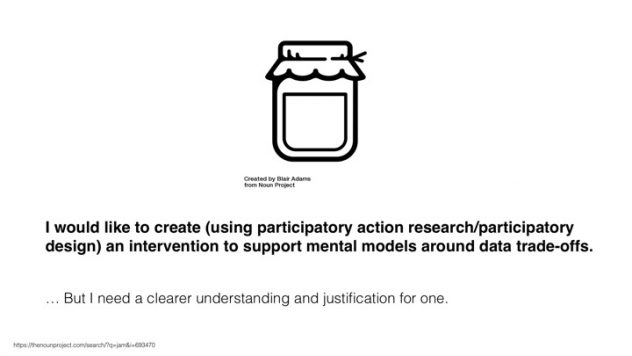 This pushed me onto talking about the next steps that should help give me the justification to create such an intervention.

What online spaces do people with IBD occupy online? Previous research focuses on particular forum or social networking site, but we do not just dwell in one space online, but we move from pillar to post. I want to better map this first of all using exploratory semi-structured interviews to understand what people’s relationship is with forums/social media and IBD. I am also interested in these questions:

I will build on interviews to create questionnaire to gather a more substantial data set that can be modelled into something more representative.

It is from there that I can begin to look at how I might be able to determine what the current ‘mental models’ are around risk with health communities.

Now of course things will change and I am open to that. I purposefully neglected using the term ‘privacy’ throughout my presentation; from the last (much shorter) one I delivered, the Q&As did turn to “well if they are doing something to cheat insurance, they should be caught out,” which is not the point. The questions and answers session was as long as the presentation itself – in fact this is what I was most nervous about.